What if the Blue Jays played a year in Montreal....

I did a Podcast episode a few months ago with one of my favourite guys in the world. Doug Fox from Future Blue Jays. The episode was entitled the Baseball in Canada Series: Exhibition Stadium.

Doug and I dove into the why's behind why the Toronto blue Jays decided on Exhibition Stadium. You should check it out if you have not already.

We talked about how they arrived to the Skydome. The state of the art facility in 1989.

Fast forward 30 years later and people have had enough of the Rogers Centre in it's current form.

They want a stadium with Natural Grass... Somehow not having natural grass affects the fans .They want things to do during the game. Apparently we can't sit in our seats and watch the game anymore? They want social areas at the stadium. To that I say go to a bar!

However I am not you. You are different that I am. So here are some thought's and solutions that maybe could be implemented in the next few years while John Tory is Mayor.

Why does it matter who is the Mayor?

It matters because if they aren't a sports fan or a baseball fan good luck getting anything done. I don;t see either the Province or the Federal Government kicking in cash for a new stadium or a renovation.

Another one of my favourite guests is Ian Hunter. He wrote a post on his website about Ideas for Rogers Centre Renovations. Check that out it's a solid piece.

Now here are my suggestions because I am a logical guy.

1- Take 24 months to do a solid renovation or a rebuild and play a season in Montreal.

In order to get a tear down and complete rebuild done on the lot Rogers Centre sits on you would need a 6 day a week dedicated group on this for 2 years. A bunch more cash to cover OT costs because that shit adds up. Rogers would need the money to cover it which now we have no idea what they have.

Also you may need city funding to complete the rebuild. Which again would be a timing issue. John Tory said that Rogers Centre is in a solid spot. I don't think he wants to see people taken out of the downtown core in Toronto.

Which is why I think they will stay on Blue Jays Way. Why not face all of the seats towards second base? Create the social areas inside the stadium. Do some funky stuff with the foul lines. Look at either grass or a cool turf which feels a lot better then it does. I've been on that grass it's like plastic stuff. Invest in areas outside the stadium for tailgating and other events.

They can't forget the most of the fan base that goes to these games when they are getting their asses handed to them are blue collar folks.

So when all of this is happening....

1- Take 24 months to do a solid renovation or a rebuild and play a season in Montreal.

It would be a great test to see how the Montreal faithful react to having a baseball team in town for a full season. It would be like a tryout. This Tampa Bay stuff is a media stunt.I imagine some people in the city are actually invested in the Jays .It would get more people into the city from Southern parts of Ontario. It is also still a reasonable distance from other major Baseball markets. New York,Boston etc. So you would draw those fans in as well.

This would also get more eyes on the city to be recognized as an Major League Baseball market.

I don't see how this hurts Montreal at all. I know the Blue Jays would have to work out some logistics. I think it is doable.

Unless you are going to build a brand new stadium in Toronto, where else can the team play?

BMO Field- Not likely and M.L.S.E I don't think wants to reconfigure the stadium again to accommodate another tenant and sport.

Put some seats at Christie Pitts? Okay.. Sure? Is that even possible?

The problem is that there isn't a park in Toronto or in Ontario that will be MLB ready anytime soon for a year of Blue Jays baseball to renovate Rogers Centre on a grand scale.

2- Build a new stadium outside of Toronto

Whether it is Downsview or Milton/Mississauga 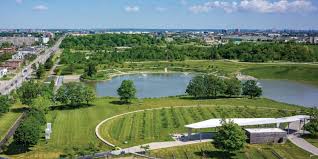 I just don't see this happening.

So much money would have to be invested on a city level an ownership level and more then likely a federal level.

Even if Rogers put the Jays into the MLSE conglomerate, I don't see it.

Whether it's doing small project by small project over the off season or closing off certain sections of the stadium during the actual season. I think this is the way it will go.

Piece by piece and year by year.

It's frustrating and unfortunate but it's more then likely the most realistic and viable option.

If you like at the state Rogers is currently in with media contracts etc. You can understand why this is more then likely the way it will go.

Until I become Owner, this is the way it's going to be i'm afraid.

They should consider my Montreal Idea though.

What do you think?